Skip to content
Legal Gear  all about anabolics and steroids

The National Police confiscates five million doses that a network produced in laboratories in Bolbaite, El Escorial and Móstoles

Another devastating punch to doping in Spain. The National Police has intervened five million doses of anabolics after dismantling three clandestine laboratories, one of them in Bolbaite, where a network elaborated the doping substances to sell them later in gyms, especially to bodybuilders who artificially enhanced their muscles with risk to your health.

The Operation Reappearance has resulted in 29 people arrested, including the one who was Mister Universe 2003, and it started a year ago after detecting the police that a network distributed illegal drugs. The head of this organization, Francisco H. S., a native of Valencia, has a history of drug trafficking, illegal detention and robbery with violence. This individual and two other members of the criminal group put into jail.

The head of the network resided in Madrid, but he traveled frequently to Valencia to meet with the distributors of the anabolic products. The police intervened 50,000 euros at the home of the mother of Francisco H. in Rafelbunyol. One of the three partners of the criminal organization, Manuel Manchado, Mister Universe in 2003, was arrested in Leganés and performed commercial functions to sell the doping substances to bodybuilders in gyms. Stained, which was released by the judge, had already been convicted in 2008 for trafficking in anabolics.

Along with this man and Francisco H., two other individuals formed the top of the network and managed two laboratories for the manufacture of illegal drugs in El Escorial and Móstoles, although the main production point was in a Bolbaite apartment, where he was arrested Israel AP

The rest of the people arrested in the operation were in charge of storing, packing and distributing the doping substances, which were presented in a very attractive way with boxes and leaflets with their own brand: ‘Spartam’. According to police investigations, the products with which they made the anabolics were imported from China without any sanitary control.

Drug intervened in the operation. / @POLICE

The investigation began in July of 2017, when the police detected the wholesale production and distribution of illegal drugs that an individual was running in Spain. Months later, the researchers coordinated their action with Europol, since the same man was involved in a similar investigation in the Netherlands, and discovered that the network distributed up to 62 illegal drugs.

After numerous surveillance, the police observed a continuous movement of vans that transported the drugs to sell them in several gyms of the Community of Madrid, and they also detected an international network of distribution of the anabolic agents through the Netherlands.

Once all the information on the case was analyzed, the agents carried out an extensive device and arrested 29 people in Madrid, Valencia and Malaga. The police conducted 15 records in homes and laboratories, where they intervened five million doses of illegal drugs, seven liters of liquid testosterone, 42,500 doses of ‘ecstasy’, 3,500 of LSD, 5,000 grams of ‘crystal’, 500 grams of ketamine, 800 grams of heroin, 9,000 grams of ‘speed’ and various amounts of cocaine, hashish and marijuana.

The researchers also seized 35,000 euros in cash, two machines to make pills, another to encapsulate the anabolic substances and thousands of cartons of counterfeit medicines. Among the people arrested in the province of Valencia are the mother of the head of the network and Ivan S. J., who was arrested in Carlet, according to legal sources. The machinery and most of these substances were in Bolbaite’s house. 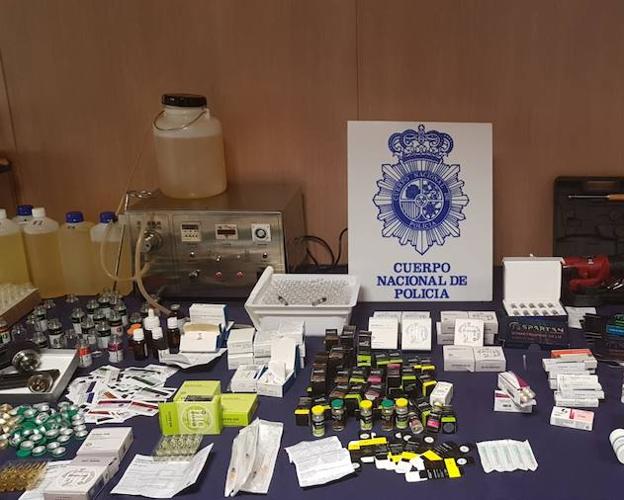